In a press conference with the German leader in Berlin, President Buhari in what might be perhaps his most stupid political blunder yesterday in Germany, in answering a reporters question on the role of his wife in his government, has this to say..." _my wife belongs in my Kitchen and in my living room and other room_"

... what a statement!  That was politically incorrect.

The ill adviced President totally forgot that he is standing next to  a woman who is a world leader.
Here in Germany as in the rest of Europe, the issue of women's right is a delicate one as women have come a long way fighting inequality in both society and at work place. Without warning, a visibly angry Mrs Merkel  (the German Chancellor) quickly ended the press conference to save the President further embarrassment.
The emancipation of women in Europe is a civil rights issue, that is why feminist groups in Germany immediately reacted to his outing as a hate speech and demanded his exit from their territory. A German opposition leader called for his immediate expulsion from Germany, while a renowned German newspaper in its editorial, has this to say about our President.
_He is simply a dumb leader, hailed as the Messiah of Africa's most populous democracy  after winning election in 2015 His agenda of fighting corruption which was given a blessing by the West, especially former colonial master, England is very unpopular in his country as citizens are more concerned about the economic hardship and joblessness to his fight for financial recovery_.

_when it comes to world issues, the former general has little knowledge of events of the moment and hardly articulates.The more you listen to him, the dumber you become_ -;

Hard words, but written with some elements of sincerity.
Germany has a woman as head of state. Germany has mother with eight children as defence minister, (comnander of a powerful millitary force) something unthinkable in most parts of the world especially, Africa. The notion here is that, girls can be everything including being President . 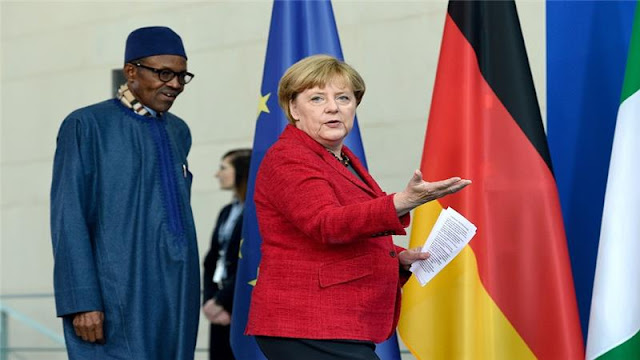